Coral is beautiful, and looks like rock, but it is actually a fragile living animal. If you touch coral with your fins or hands, you kill it. You might think this is because you crush it or break it. That is bad, and should be avoided also. But even just lightly touching it acts more like a poison to it. Sometimes the results of touching it will not appear for weeks to months.

Coral is so wonderful to see and so important to our world that you should feel like you just ran over your kitten if you touch coral. Not to mention that coral is sharp and will often cut your skin, leading to infections, and can cut your fins also.

Fire corals have a bright yellow-green and brown skeletal covering and are widely distributed in tropical and subtropical waters. They appear in small brush-like growths on rocks and coral. Divers often mistake fire coral for seaweed, and accidental contact is common. Upon contact, an intense pain can be felt that can last from two days to two weeks. The very small nematocysts on fire corals contain tentacles that protrude from numerous surface pores (similar to jellyfish stings). In addition, fire corals have a sharp, calcified external skeleton that can scrape the skin. 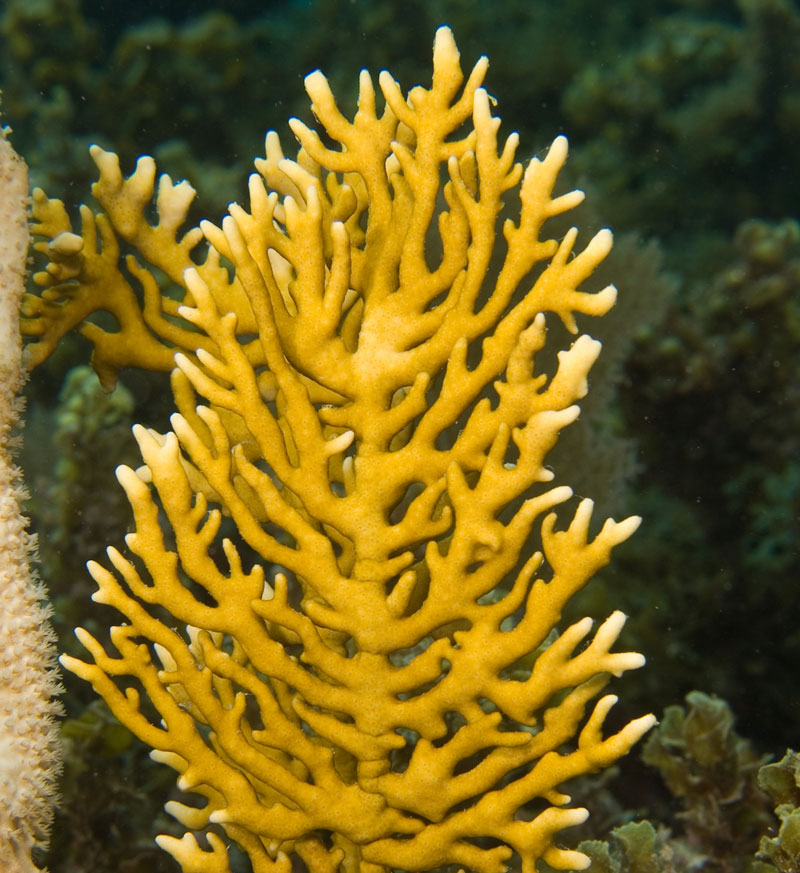 Fire coral has several common growth forms; these include branching, plate, and encrusting. Branching adopts a calcerious structure which branches off, to rounded, finger-like tips. Plate growth adopts a shape similar to that of the smaller nonsheet lettuce corals – erect, thin sheets, which group together to form a colony. In encrusting growth, the fire coral forms on the calcerious structure of other coral or gorgonian structures.

If you come into contact with fire coral you will have to wait it out. There are some things you can do to ease the pain in the meantime. First use vinegar to kill any remaining stinging cells clinging to your skin. Next, apply heat, either hot pack or warm water, to help break down the toxin. Finally, apply hydrocortisone cream as necessary to reduce inflamation.